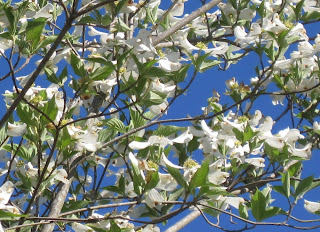 Ah, SPRING is here.  Today is the first day of spring according to the calendar.  Every year I feel so great during this time.  Some days cool, some days warm.  Some days still downright COLD.  But each day beautiful with promise.
In the front yard are three dogwood trees.  They are spaced about 15 to 20 feet from each other in and amongst azalea bushes, butterfly bush, and a few other small landscape plants.  What amazes me about the dogwood trees as I watch them for my second coming of spring back in North Carolina is how much difference is reflected in where they stand in the yard.  The tree at the farthest north-east section of the yard gets about half an hour more sunlight than the one in the middle of the yard, and about an hour more than the tree at the other side of the yard.  But the one with the most sunlight is practically in full bloom where as the middle is just budding and the one with only an hour less sun is still tight in the bud.  Just an hours difference of sun and warmth.
Are we not just like these trees?  If we had received just a BIT more attention and warmth during our formative season, would we have been much different?  For one season perhaps not, but cumulatively over time, season after season, just a wee bit more light may have made all the difference for some of us.  An extra kind word here and there.  Just a bit more encouragement from those we admired.  A few more minutes with people we loved who loved us in return.  Taken in sum total, these precious minutes would add significantly to the bottom line of our self image, our idea of what caring and concern could look like.  A bit more sun, a bit more warmth, a bit more love.
I will strive to offer a bit more each day to those I love.
Namastè
Posted by BRIAN TODD BARNETTE at 6:35 AM No comments:

As above, so below. As within, so without. 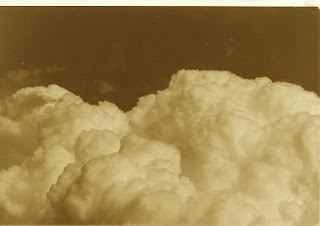 My heart goes out to the people of Japan as they struggle to adjust after the devastating earthquake and tsunamis that followed.  The damage to their lives are made more challenging by the resulting damage to their power plants and the infrastructure.  So many of us debate the readiness any of us would have should this or anything like it happen to us.  While Japan and in particular Tokyo are among the MOST “ready” places on Earth to deal with earthquakes, it seems that the thresh hold for readiness is never enough.  And the coastal areas really cannot withstand the damage caused by the tsunamis.  But through it all, many reporters covered how ready the Japanese people are to remain gracious to their neighbors and even to the visiting news teams.
Still many scientists race to offer their takes on the “whys” and “hows” of natural disasters.  Sure the tetonic plates shift, and the energy carried along the floor of the sea increases the power of the waves as they near shore.  And we would believe that it is the natural occurrence on a planet with a volatile molten core.  While it WILL happen from time to time, part of me wonders about the spiritual principles that could be at play.  For those who exist trans-the-physical body and may believe that the earth and our physical existence on it mirrors what occurs between every one of us on the metaphysical plane.
All of the strife that has begun to boil over in the Middle East lately, all of the political strife in our own country and even in miniscule amounts in the television we watch, like “Celebrity Apprentice,”  “Bad Girls Club,” “The Real Housewives of ANYwhere,” and “Survivor” just to name a few are rife with conflict, argument, back-stabbing and all manner of ill tempered folk who become celebrities and popular heroes JUST for being mean and vindictive.  Just add a daily over-dose of caffeine and a long line in the market and our lives can quickly seem to be filled with an inner calamity that will seek an  outward expression.  I firmly believe that the physical world around us rises up to manifest our inner creation.  The destruction of the rain forest may be an outward example of the damage we do to our own bodies with poor choices in diet and habit.  The global climate changes are caused by out disrespect of the balance needed in resources and consumption and pollution but it may also by exacerbated by the lack of patience and grace we offer each other on a daily basis.
A well known spiritual principle is “As above, so below.  As within, so without.”  We affect our surroundings, our lives and our experience of this world with our thoughts and actions.  But the good news may be that it doesn’t necessarily take a majority to turn it back.  It has been postulated that as few as one tenth of one percent of us agreeing on something is enough to cause a shift in our world.  And most spiritual leaders believe and teach that “good thoughts” are much stronger than “bad” ones.  Buckminster Fuller and other very forward thinkers have talked of a “critical mass” of the population that so inclined and of same mind can indeed alter the fabric of what we term “reality.”   What this magic number of aligned souls might be we may never know.  How do we divide any particular group to the point of being able to accurately identify the “one tenth of one percent” of us required to tilt the balance back toward our good?  All I can really be concerned with is MY own effort to be part of that magic number.  And if I can make a positive affect on one tenth of one percent of the people with whom I interact, it may have an exponential effect all on its own.
I have been lucky enough to meet many people who strive to be the best people they can be.  If I gave the “one tenth of one percent” a name for clarity, I would call it the “light effect.”  And many people have bestowed upon me their “light” and it is incumbent upon me to pass it forward and help reach for that critical mass.  The more I recognize when someone is giving me ill will, being rude, mean or critical, maybe all I need to do is consciously choose to treat the next people I encounter with just a little extra kindness.  I may not change the person who was mean to me, but I can certainly put my energy toward being a light in someone else’s day.  Now that may not ward off earthquakes or stop the ice caps from melting, but I feel certain it can still help create a better world.
Posted by BRIAN TODD BARNETTE at 3:21 PM No comments: