examples of an effort to avoid frustration by being creative 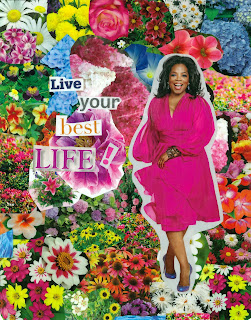 About a year ago, I was in one of my bouts of anxiety and depression.  Not severe enough to warrant pharmaceuticals, and yet persistent enough to stifle me from doing the things I know I should have been doing.  I became "conscious" enough for a moment to make a decision.  CHOOSE A DIFFERENT RESPONSE.  Do something differently.  I had a large stack of magazines and I told myself, look through them, and each time you find the word "love," cut it out.  Admittedly, its a lot easier to find the word "LOVE" when you look through "Oprah" magazine or even "Vanity Fair" than you will looking through "GQ" but its there.  I ended up with quite a collection.  Then I asked myself, "now what?"  So I went back through all of the magazines and cut out pictures of flowers, balloons, candles, hearts, and other words like "happy" and "joy."  Then I found a piece of poster board, grabbed some glue and set to work just putting it all out there.  I worked non stop for a few hours and ended up with something that I was pretty proud of, as far as exercises in avoiding frustration go.  I even had it framed.  I kept the box of cut outs that were left and a few months later, I repeated the exercise.  It became cathartic as well as allowing my mind to be semi-focused on a task that allowed the creativity in me to come to the surface.  And thats the important part.  I needed to get out of my cycle of inner monologue and be able to really hear the whispers of my own creative impulses.  Its helped me quite a bit since then.  And it doesn't hurt to realize that all you need to do is LOOK for "love" to find it.  The last of these projects I did featured none other than Oprah Winfrey herself, along with her mantra "Live your best life."  Its worth repeating. 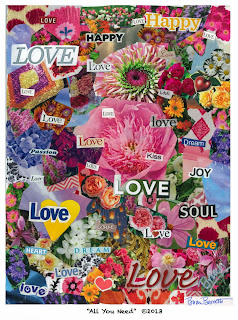 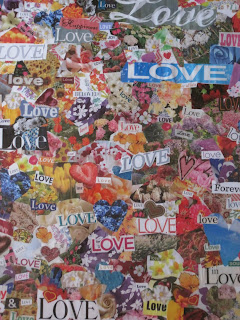