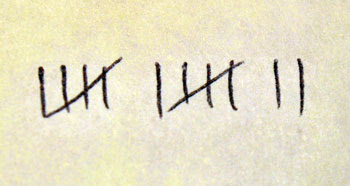 I don't keep score.  Not really, or at least not anymore.  Thats a folly of youth and misinformation in my mind.  Except for being kids and fighting with siblings and that type of "payback" I don't think I was equipped to "settle the score" with others.  If anything, when I was younger, I was more likely to KEEP trying to help someone, woo someone, or even befriend someone, if they were dismissive of me or even mean to me.  It was to prove something to myself more than to them though.  Not sure I understood it then, and only slightly certain I comprehend it now.  But if someone did something "wrong" to me, or if they hurt me, I just kept trying.

Also, Ive never been much of a competitive person.  I like games, playing games, team games, card games, what have you.  And some of my high school friends can attest to a few games of Canasta, Backgammon, and Uno getting PRETTY heated, watch out!  But it was always in fun, laughing as you won, laughing as you lost.  The intensity of a full blown game of Monopoly or RISK! much less organized sports, was always lost on me.  If it wasn't fun no matter the outcome, why do it?  If you felt it wasn't enough to WIN but that you had to DESTROY your opponent, we probably were not friends.  Even if you only experienced sports from the sofa.  I think I liked the Miami Dolphins because I was from Florida, not because of Larry Csonka and certainly not because of Dan Marino.  My official NFL pajamas and school bag were just COOL, with their aqua and orange colors and my favorite marine mammal mascot.

That extends to later in life.  I want to do things because I am inspired by the thought of doing them.  Id LOVE others to get on board and maybe even get as excited as I am about things.  I feel that if you tell me "No, Im not interested," it just means I haven't explained it well yet.  I don't think God (the Universe, Source, my Higher-Self) would give me such great inspiration, motivation, incredibly creative ideas that quite honestly border on genius, if those ideas were only to torment me.  The idea of "let you haters be your motivators" bores me.  If they don't believe in me, if they don't see what I see, or can imagine the things that I can imagine, then really I just feel sorry for them.  I think to myself; "How sad.  They must not believe in magic."

I want to do something wonderful.
Posted by BRIAN TODD BARNETTE at 8:46 AM No comments: