On this day in history, October 14, back in 1977, I was a 12 year old boy, living in Melbourne, Florida.  To fully understand how this particular day impacted me, I need to give a little background. 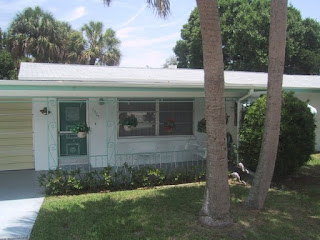 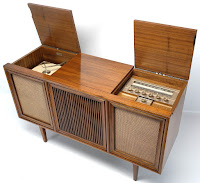 My grandfather had been a contractor during the construction of Walt Disney World, and we visited the Magic Kingdom during Christmas of the opening year.  I remember a few things very vividly about that day.  Seeing a giant Christmas tree, watching the parade, the Jungle Cruise, the Haunted Mansion, and so many others.  I remember the souvenirs we got as well.  I got a sweatshirt with Winnie the Pooh, along with a toy version, stuffed with sawdust.  A glass mug with “BIg Al” the slow talking bear from A Country Bear Jamboree. But maybe my favorite was an LP (long playing) record of the story and songs of The Orange Bird, starring Anita Bryant. My grandparents home, where we lived often, had a large console stereo with record playing turn table in the front room, and I would play it over and over again.  The title song, written by  genius duo the Sherman brothers of Mary Poppins fame, became almost an anthem for me and my young imagination. 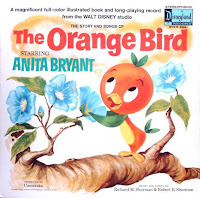 The Orange Bird was a combination Disney character and mascot of the Florida Citrus Commission, in exchange for their financial support in opening the Enchanted Tiki Room at the Magic Kingdom.

Over and over I would listen, until I had memorized the words and songs.  I would try drawing, and coloring my own version of the Orange bird incessantly. I would further imagine that the little Orange Bird would come visit the orange, tangerine, and grapefruit trees in the back yard.  I was entranced by the story.  I would get excited when I would see the occasional television commercial of Anita Bryant singing about Florida orange juice, with the animated Orange Bird flying around her at the Sunshine Terrace in Adventureland. I felt as if Anita Bryant was practically a distant relative. 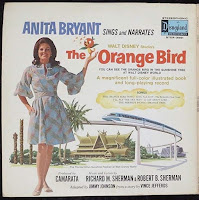 For years, this LP and story became so identified with my grandparents home, Florida, my trip to Walt Disney World, and childhood overall. So on an day in October of 1977, once again at my grandparents house, we happened to be watching the evening news.  There was no air conditioning in my grandparents home, so the jalousie windows in the back room were open, a warm breeze still coming into the room.  I was laying on the terrazzo floor, probably drawing or reading.  Then I heard that familiar voice.  Anita Bryant was giving an interview of some sort.

It seems she had been addressing a group in Des Moines, Iowa, and they showed a replay of a man coming from off camera and hitting her in the face with a pie, which appeared to be a lot or whipped topping or meringue. Covered in the pie topping, she made a quip that “At least it’s a fruit pie.”  I didn’t quite understand. She then started praying for the young men who had been there to protest, I understood that, having been brought up “in the church” and fully aware that people were sinners, and you needed to pray for them.  Although I didn’t understand exactly what made these men “evil” and worthy of such animosity.

Intrigued, I started to pay attention over the next few days to this story, which was covered a few more times.  She was condemning the “homosexuals” and their lifestyle and had been celebrating the reversal of a decision in Dade County, Florida that had offered some sort of “protection” for Homosexuals. This was being championed by Anita and others.  Something in me fractured in those few days.  I was too young to fully grasp in what way, but instinctively I knew that she was talking about me.  Something in me was broken.  I know even at that young age, I had been aware I was not only a “sinner” but that I was fundamentally damaged. I had been reminded repeated at church that I was guilty of something, born into sin as a consequence of just being human.

It was years and years before I could even approximate any form of self worth, and that lifetime struggle continues to this day.  But on that day, October 14, 1977, I did awaken to a deeper sense of self. A profound clarification that I was different than what was expected.  While I now find that to be more of a gift, than a curse, I look back at that young boy, locked inside my psyche, and wish for him to know that the magic that he experienced prior to the impact of that news story, will someday actually save him.

I lost my copy of the LP years ago, probably in a garage sale after my parents divorce. But thanks to online auctions, I obtained a copy a few years ago and it hangs in an album frame as a piece of art. I am able to view it now with a sense of reverence, and forgiveness to those who would condemn me.  And more than that, a deep appreciation for myself and the history I share with others who are like me, and with those unlike me. And I can still sing every word with conviction. 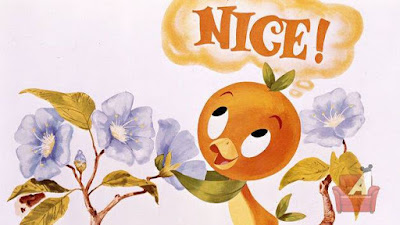 Little Orange Bird,
In the Sunshine Tree.
Won't you think of something sunny just for me?

Think of funny thoughts.
Or a sunny word.


That will make me happy, little Orange Bird.
Posted by BRIAN TODD BARNETTE at 6:42 PM No comments: